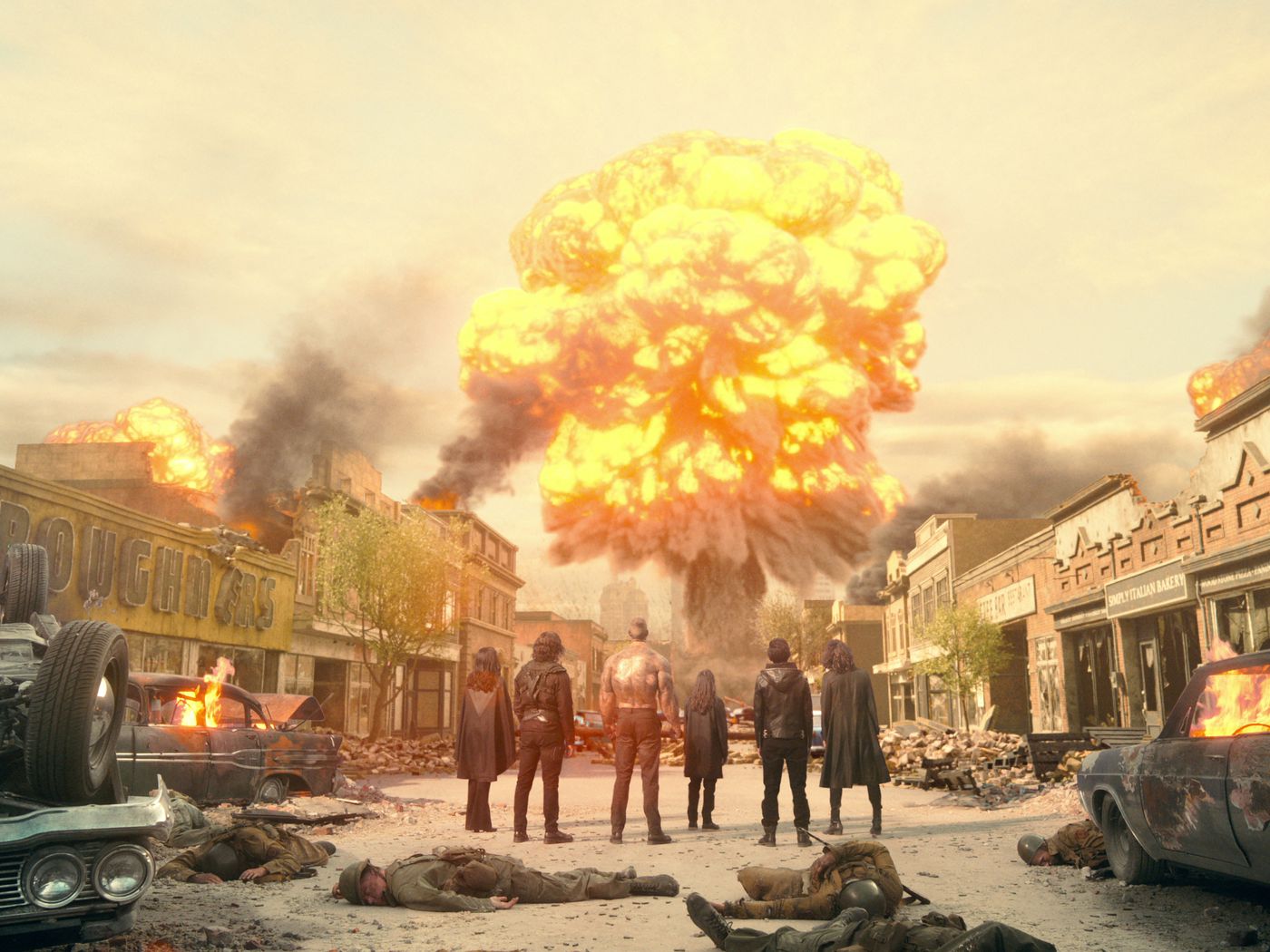 The dysfunctional family of seven ex-superheroes known as the Umbrella Academy have two things in common: They all were born on the same day, and they’re all working — some more consciously than others — through the trauma of their father’s abuse.

Beneath the end-of-the-world, blow-up-the-moon stuff, the first season of Netflix’s fizzy live-action adaptation of The Umbrella Academy, Gerard Way and Gabriel Ba’s Eisner Award-winning comic book, had that emotional heart too. In season one, we met the Hargreeves kids, now adults, all puzzling out their lives when their dad, Reginald Hargreeves, dies. His death brings them all together, forcing them to confront unanswered questions about forgiveness, abuse, and family — questions they buried with time.

With their bad dad dead, finding closure should be easier for the kids. Or at least, that’s what they believed. Their hope is that any of their trauma or scars will die with the person who caused them. But complicating matters is that these superpowered humans have to stop the end-of-the-world event they inadvertently caused.

Despite having powers like superstrength, marksmanship, communing with the dead, and psychic manipulation, they failed. But instead of dying with the rest of humanity, they time traveled to go back before the apocalypse to try again to stop it. They now find themselves scattered in Dallas at the beginning of the 1960s.

That first season spent a lot of time laying all of this out, making some parts of it feel a little like a chore. But all that time spent on extreme exposition pays off in a flashier, more entertaining, tighter second chapter.

Season one of Umbrella Academy set the board, and season two plays the game.

There’s a lot more zapping and superpower-ing in season two, which should appease comic book fans who want to see superheroes do that kind of thing. But it also swings for something way more emotionally resonant, wanting to comment on the imperfect, human way we heal and the gulf between people wanting to change their ways and actually doing so. And in its best moments, The Umbrella Academy’s second season manages to balance both humanity and superheroics without sacrificing either.

One of the core devices in Umbrella Academy is that the Hargreeves are each known by a number, assigned to them by their father: There’s Luther (#1), Diego (#2), Allison (#3), Klaus (#4), Five (#5), Ben (#6) and Vanya (#7). It’s like they’re players on a basketball team whose names you never learned. Or in the Academy’s case, the numbers are a way to differentiate the seven different superpowers they possess. The dark edge is that reducing your kids to a number is just one of several emotionally abusive things Reginald Hargreeves, the patriarch of the family, did.

Hargreeves developed his adopted children into a superhero team, putting them through relentless physical training, teaching them violence, pitting them against each other, and punishing them when they failed. They ultimately did fail when the world needed them most, resulting in Ben’s death and the disappearance of Five, hence the disbandment. And they failed again at the end of last season, as Vanya’s power manifested itself to destroy the moon before all of them, including Ben, decided they could save the world if they just time traveled.

Believing you can avert an armageddon that you and your siblings caused is in itself a slightly egotistical thing to do. But these are the Hargreeves, and they’re truly the only ones who can stop it.

After jumping through that portal, the adult Hargreeves kids are separated and spread out in various pockets of time before November 22, 1963 — the day President John F. Kennedy is shot in Dallas and around 26 years before they were all born. It also turns out that, although they’ve timed-hopped, there’s another cataclysmic event happening that they need to stop. But that’s very difficult to do when the siblings aren’t in the same place or even the same time.

As tantalizing as that mysterious, encroaching doomsday itself is, the best stuff about the second season is how we get there and how we get the Hargreeves siblings on the same page.

The time jump forces the siblings, for some brief moments, to live independently from one another. Time travel, for the siblings, is a forced immersive therapy of sorts. These brothers and sisters, their feelings, and their identities were so tightly tethered to one another. Now they’re forced to live as if the others, and their father, don’t exist.

Which means we see each of them try to heal their lifelong wounds in their own way.

Luther (Tom Hopper), with his superstrength, becomes a bodyguard by day and an underground fighter by night to dull the pain. Diego’s (David Castañeda) superhuman marksmanship is no use in the mental institution he’s stuck in, but he’s plotting every day to get out. Klaus (Robert Sheehan) drinks and drinks and somehow starts a cult. Five (Aidan Gallagher) is the only bridge to the others, thanks to his time-hopping powers.

And then there’s Allison (Emmy Raver-Lampman), who can force people to do anything by preceding an action with the phrase “I heard a rumor” (such as, “I heard a rumor that you ate a cheesecake”), who’s unfortunately plunked down in 1961. Unlike her white siblings, Allison faces an added threat from their 1960s time traveling because of America’s segregation laws and rampant racism. White privilege, it seems, extends to time travel.

The central conceit in Allison’s story is that she could easily change the world around her by “I heard a rumor you weren’t a flagrant racist”-ing everyone around her, but she never says that. The show purposely doesn’t spell out exactly why she doesn’t, allowing you to come to your own conclusions about why the racism she’s facing is too overwhelming to be fixed. Or maybe the excuse is that she isn’t powerful enough to stop the racism. Or that racism is more complex than simple actions to be commanded one way or another.

Or maybe Allison’s afraid of how much she’s truly capable of.

In season one, Allison lost custody of her daughter when her ex-husband revealed that he caught Allison using her rumor power to make their daughter fall asleep. Even though Allison loves her daughter, she still used her powers to make her daughter do something against her will. Allison gets a stark lesson in the human consequence of her powers, something her father encouraged her to use and allowed her to ignore the fallout from.

We actually do see her use her powers in a “Whites Only” diner in a late- season episode. The diner’s manager has been a racist prick over and over again. She rumors the manager into serving her coffee. She’s so enraged with him, though, that she tells him to fill her cup until it spills over and over, scalding his hands raw and red. Skin sloughs off. He still pours. She can’t stop inflicting pain.

Allison could have easily just rumored the man to serve her and stop him when the coffee cup was full, saving him the burns. But she inflicts pain upon him because it feels square with the racism and injustice she’s been fighting in this timeline and because punishment and pain are what her father taught her.

What’s fascinating is that the show goes to great lengths to show that Allison isn’t a villainous person. This scene doesn’t happen until after Allison has refrained from using her powers against injustice for the majority of the season. Instead, her lapse shows us that being “good” or being healed isn’t a one-and-done fix. Healing and bettering yourself require constant work.

In that same vein, Allison and the Hargreeves siblings confront an ugly truth when they re-connect with Vanya (Ellen Page): They each had treated her as badly as their father had.

Before being teleported to the 1960s and before adult Vanya fully unleashed her power that brought a piece of the moon crashing down, the adult siblings locked her away in a padded room because they thought she was too dangerous. Instead of sticking up for her or protecting her from their father’s abuse when they were kids, they neglected her and treated her as the problem.

This is the kind of behavior you’d expect from people whose entire family life is training, punishment, and competition, but while it’s explainable, it’s not excusable. Ultimately, the siblings spend this season learning how to ask for forgiveness and being able to forgive each other.

This isn’t to say that everything in Umbrella Academy’s second season is ooey- gooey touchy-feely.

Since we know what everyone’s powers are now, the show loosens its grip on the exposition and allows for more of its signature, music-cued fight sequences and action scenes peppered throughout the season. This includes an explosive armageddon with all the siblings going full force — rumoring people until brains explode and faces melt, crumpling artillery shells with their bare hands, Kraken-like tentacles flinging soldiers around — that happens in the first seven minutes of the first episode.

But viewers already know by season two that Umbrella Academy is always ready to deliver spectacle. It’s just that this season, it’s finally ready to deliver everything else at that same level.

Every day at Vox, we aim to answer your most important questions and provide you, and our audience around the world, with information that has the power to save lives. Our mission has never been more vital than it is in this moment: to empower you through understanding. Vox’s work is reaching more people than ever, but our distinctive brand of explanatory journalism takes resources — particularly during a pandemic and an economic downturn. Your financial contribution will not constitute a donation, but it will enable our staff to continue to offer free articles, videos, and podcasts at the quality and volume that this moment requires. Please consider making a contribution to Vox today.