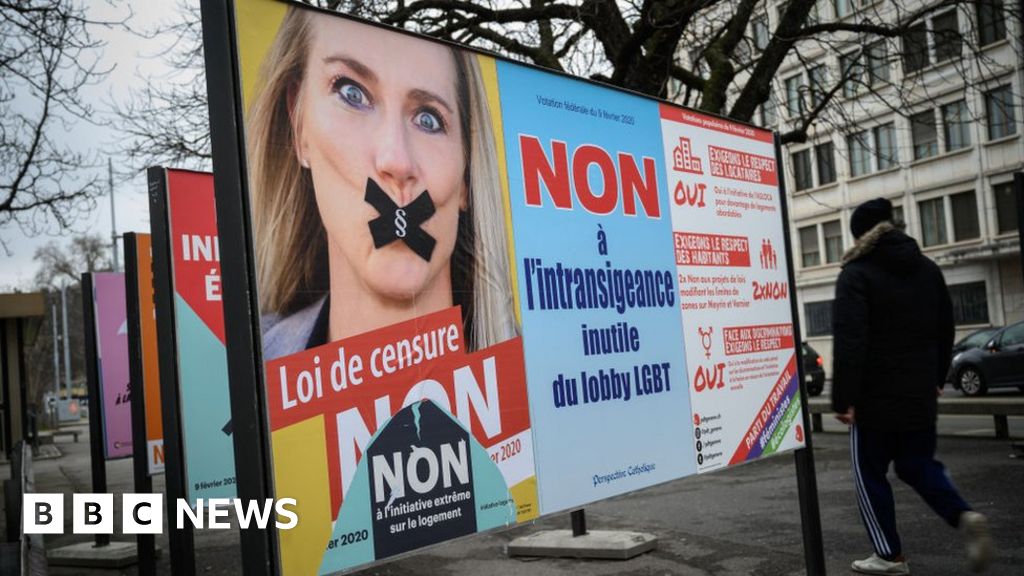 Voters in Switzerland have backed a proposal to make discrimination on the basis of sexual orientation and sexual identity illegal.

It had argued Swiss law on the issue lagged far behind other countries in Europe. Opponents of the new law argued it could restrict free speech.

In Switzerland, discrimination because of race or religion is already illegal.

In the run up to the vote, campaigners had said they thought the result would be tight, and that a yes vote of more than 60% was unlikely.

Pink Cross Switzerland said: "The result proves a strong sign of acceptance for lesbians, gays and bisexuals. After the clear yes, the LGBTI community will use this momentum to achieve the consistent implementation of the penal code and to enforce marriage equality."

A bill to legalise same-sex marriage is currently on its way through parliament.

"Many Swiss people tend to overrate how modern our country is," explains Anna Rosenwasser of the Swiss Lesbian Organisation.

She points out that on the Rainbow Map of 49 countries` respect for LGBT rights, Switzerland ranks just 23rd. "It might be rich, but it`s really not modern yet. We have no laws concerning public discrimination based on sexual orientation."

To support her argument that the lack of legal protection causes harm to the gay community, Ms Rosenwasser cites suicide rates: "Amongst queer people in Switzerland, it is five times higher compared to heterosexual people. That`s quite something, it shows how we are not feeling safe yet."

## Who was against the proposal?

"We don`t even know if jokes about gays will be allowed," Benjamin Fischer of the right-wing Swiss People`s Party told Swiss television.

"Some say yes, some say no they will be punishable. We live in a country with freedom of expression, people should be allowed to think and say what they like, even if it`s a bit stupid or tasteless."

There was opposition too from some religious groups. Although Switzerland`s reformed church backed the new law, the Swiss Evangelical Alliance, which has significant support in rural areas, was sceptical.

"Our churches see the marriage of a man and a woman as the only couple they want to marry," explains the general secretary of the alliance, Marc Jost.

"We just want to be free to say: `Ok, we want to privilege the marriage of a man and a woman.` And we don`t want to be at risk if we share this opinion, and treat other couples in a different way."

Marc Jost is not comfortable with the moves to legalise same-sex marriage, despite family circumstances that might have encouraged him towards a different point of view.

"My father is gay and lives in a civil union, and of course we disagree on very personal questions," he explains. "But we still have a good relationship. It`s important to show it`s possible to peacefully disagree on important questions in life."

## How bad is the discrimination?

Supporters of the law argued that no-one would be prosecuted for private comments, or for religious beliefs. But, they say, the law should protect the LGBT community from public discrimination, and aggression.

Members of the gay community interviewed by Switzerland`s 20 Minuten paper said they were often physically attacked, some even hospitalised. Other groups of young men told the same paper they felt it was ok to hit openly gay couples, even suggesting they could be "cured with a few punches".

This is the point, says campaigner Jessica Zuber, where the argument over freedom of expression goes too far.

"Freedom of expression in a liberal democracy only goes as far as the individual right to human dignity is protected," she says.

Passing the law would "send a strong sign towards the acceptance of human dignity of everyone, no matter what their sexual orientation".

That would be an important sign for Anna Rosenwasser, who knows what it is like to feel uneasy about expressing her identity.

"I actually dated men for 10 years. Now I have a girlfriend, and we are a cuddly couple, we do hold hands. But there are situations where we will not hold hands, in order to feel more safe.

"I cannot remember any situation when I`ve been with a man where I actually let go of his hand to feel more safe."