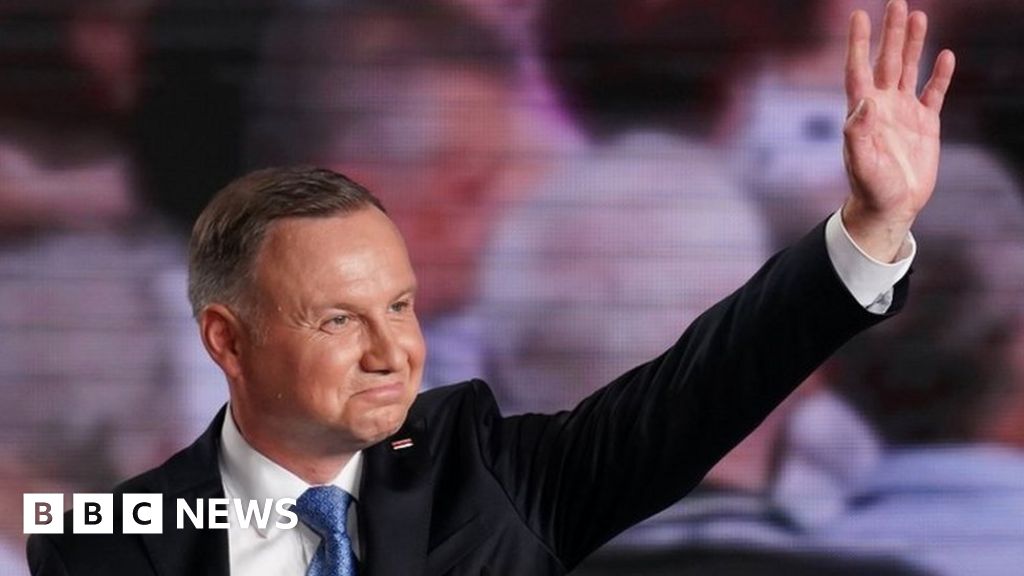 Poland`s President Andrzej Duda has topped the first round of voting but must still go into a run-off vote in the presidential election.

The conservative Mr Duda will face the liberal mayor of Warsaw, Rafal Trzaskowski, in the second-round vote in two weeks` time.

With more than 99% of results in, Mr Duda took just under 44% of the vote and Mr Trzaskowski just over 30%.

Turnout was high despite coronavirus and social-distancing restrictions.

President Duda is an ally of the governing nationalist Law and Justice (PiS) party and if he loses, the opposition could push through major changes in Polish politics.

The president has the power to veto legislation, so Mr Duda`s re-election would be of benefit to PiS, of which he used to be a member.

Mr Trzaskowski, meanwhile, has pledged to heal rifts with the European Union. Mr Duda`s allies have frequently clashed with the bloc over controversial reforms to the judiciary and media.

Mr Trzaskowski rose fast in the polls after joining the race in May. Previously a member of Donald Tusk`s liberal Civic Platform government, he won the capital`s race for mayor in 2018 promising "Warsaw for All".

"This is a decisive time. A lot will really depend on this decision," said Poland`s anti-communist hero, Lech Walesa, as he voted in the northern port of Gdansk.

"He`s doing a terrific job," said President Trump, in what was widely seen as a domestic boost for Mr Duda. "The people of Poland think the world of him."

Poland`s election had been due to take place in May, when Mr Duda was higher in the polls and stood a better chance of winning in the first round.

Although the epidemic had not yet peaked, the government was desperate for the May vote to go ahead. It eventually backed down when a junior coalition partner joined the opposition in saying PiS were putting politics before public health.

## A fascinating run-off ahead

Polish media say the outcome of the first round of the presidential poll augurs a vitally significant run-off vote on 12 July.

Centre-left daily Gazeta Wyborcza say Poles will make a "civilisational choice" next month between a "democratic and an authoritarian Poland".

Polityka weekly says Andrzej Duda`s performance augurs well for the incumbent president: "There has never been a time when a candidate with such an advantage in the first round went on to lose in the second."

But Gazeta Wyborcza reports that public broadcaster TVP`s "propaganda machine suffered a spectacular defeat. It did not drag down Trzaskowski`s ratings despite its hate campaign, and even shaped his image as Duda`s most dangerous rival."

Commentators say a fortnight of intense campaigning lies ahead. According to conservative daily Rzeczpospolita, Mr Duda`s problem "is that his traditional PiS support must have been mobilised almost to the limit".

"The president will face a difficult choice: to continue to beat the drums of war to mobilise his army, or perhaps to try and build bridges... One thing is certain: on 12 July we will have a fascinating election night."