NBA: Orlando Magic`s Jonathan Isaac is first player not to kneel for anthem since restart 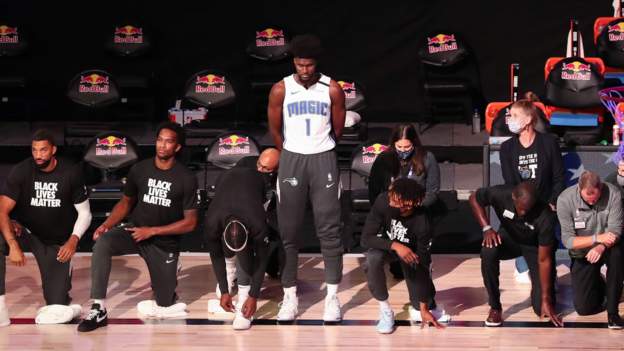 Orlando Magic forward Jonathan Isaac became the first NBA player not to kneel during the national anthem since the league resumed on Thursday.

On Thursday all players from the four teams in action all knelt during the pre-match anthem.

He added: "A lot went into my decision ... kneeling or wearing a Black Lives Matter T-shirt doesn`t go hand in hand in supporting Black lives."

Isaac had told his team-mates earlier in the week of his decision. They all chose to kneel before their 128-118 win over the Brooklyn Nets.

"That`s a personal decision," said Magic coach Steve Clifford. "We`re all supporting each other in this. And if guys are not comfortable kneeling and they want to stand, nobody has a problem with that. I support him. His team- mates support him. The organisation supports him. That`s part of living in our country."

Explaining his decision to stand, Popovich, who like Hammon wore a Black Lives Matter t-shirt, said: "I prefer to keep that to myself. Everybody has to make a personal decision. The league has been great about that. Everybody has the freedom to react any way that they want. For whatever reasons that I have, I reacted the way I wanted to."

Spurs guard DeMar DeRozan added: "(Their decision to stand was) out of a positive side of their heart. Same way we kneel. Don`t take away nothing from those guys."

### Harden and Antetokounmpo star on return

Giannis Antetokounmpo scored 36 points as the Milwaukee Bucks beat the Boston Celtics 119-112 in their first game since the restart.

The Bucks, who are trying to win their first NBA title since 1971, had the best record at 53-12 when the league was halted in March because of the coronavirus pandemic.

Elsewhere James Harden scored 49 points and Russell Westbrook added 31 as the Houston Rockets beat the Dallas Mavericks 153-149 in overtime, despite Luka Doncic`s 15th triple-double of the season as he recorded 28 points, 13 rebounds and 10 assists.