Hajj pilgrimage in the wake of the COVID-19 pandemic 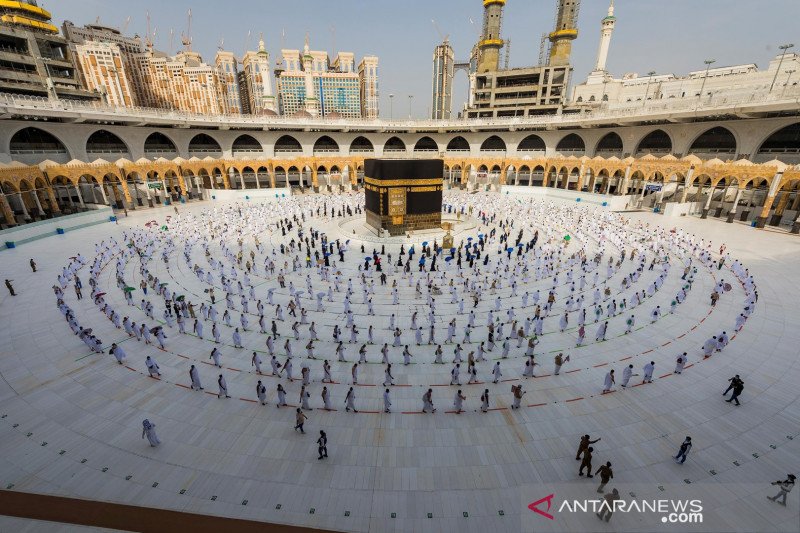 Jakarta (ANTARA) - On Wednesday (July 29), or 8 Dhu al-Hijjah 1441 Hijri, pilgrims congregated in Mina, Mecca, to perform the Tarwiyah worship that signals the start of the pilgrimage.

The next day, the 9th day of Dhu al-Hijjah, after mid-day to the Asr prayers, pilgrims began flocking to the plains of Mount Arafat to perform the second- day ritual that is the climax of Hajj.

The pilgrims gather on the plains of Arafat for the wukuf, or gathering, considered to be one of the pillars of the pilgrimage.

The wukuf begins with sermons. Midday to the Asr prayers are performed together.

The pilgrims spend the entire day on the plains of Arafat to supplicate to Allah SWT (Almighty) to forgive their sins and to pray and read the Qur`an until sunset.

The wukuf in Arafat marks the legitimacy of one`s pilgrimage, which is followed by other pillars of pilgrimage. This starts from staying overnight at Muzdalifah and pelting stones at Mina, to performing the final walk, known as tawaf, seven times in the anticlockwise direction around the Kaaba, Islam`s holiest shrine, at the Masjid Al-Haram grand mosque in Saudi Arabia.

A view of the multitude of ​​people dressed in white cloth adorns the entire series of pilgrimage.

Arafat is like a sea of ​​people during every pilgrimage season. Huge numbers of pilgrims perform the wukuf. A similar spectacle is apparent while throwing stones at Mina and the final walk around the Kaaba.

However, the series of pilgrimage this year appear quiet, in the absence of millions of Muslims, who pray to Allah with tear-filled eyes.

The corona pandemic has changed everything. The global pandemic of the COVID-19 disease has resulted in Hajj 2020 being implemented with a limited number of pilgrims.

Several pilgrims maintain social distance in the midst of the coronavirus outbreak (COVID-19) during prayer at Namirah Mosque, Arafat, outside the city of Mecca, Saudi Arabia (30/7/2020). ANTARA/REUTERS/HO-Saudi Ministry of Media/aa.

This year`s Hajj is only for Saudis and expatriates living in the kingdom of Saudi Arabia.

Only one thousand people residing in the kingdom participated in this year`s ritual, as compared to some 2.5 million people from across the world for the 2019 Hajj.

Some 70 percent of the congregation comprised foreign citizens (expatriates) or expatriates living in Saudi Arabia while 30 percent constituted citizens of Saudi Arabia, with priority given to those working in the fields of health and security.

From the data received as of July 25, 2020, five Indonesian citizens have registered as pilgrims this year.

This time, the pilgrims also moved in small groups of 20.

The Saudi Arabian government took the decision to limit the number of pilgrims this year to prevent the spread of COVID-19.

Saudi Arabia does not intend to take any risk in terms of the pilgrimage activities, which attract millions of Muslims annually, to become a trigger in a surge in new cases of COVID-19.

Until Saturday, the COVID-19 virus had infected 17.3 million citizens worldwide, with 681 thousand fatalities. In Saudi, the number of people infected with coronavirus reached 275 thousand.

The Hajj 2020 health protocol not only limited the number of pilgrims to 2020, but the Government of Saudi Arabia has also applied strict health protocols in the implementation of Hajj 2020 to prevent the spread of coronavirus.

This health protocol applied to pilgrims and officers. Eight health protocols were set in place for the implementation of the 2020 pilgrimage, including the number of pilgrims permitted to perform the pilgrimage at a time restricted to only one thousand.

Muslims wear masks and maintain social distancing while performing Tawaf around the Kaaba during the Hajj season amid the coronavirus pandemic (COVID-19) in the holy city of Mecca, Saudi Arabia, Friday (31/7/2020). ANTARA FOTO/Saudi Press Agency/Handout via REUTERS/pras/cfo Other additional protocols that necessitate implementation, included maintaining distance between people at all places of worship and using masks and face shields. Pilgrims were also prohibited from touching the Kaaba.

The authorities have also installed a barrier to prevent people from touching the Kaaba. Cleaning or spray disinfection of the area were also be conducted regularly and at all times in various places. Bottled Zam-zam water were be distributed to worshipers at all times.

Those suspected of having contracted COVID-19 were allowed to practice worship after undergoing an evaluation and receiving treatment by a doctor first. They were kept at a special place that has been readied.

Member of the Council of Senior Scholars and Advisor at the Royal Court Sheikh Abdullah bin Suleiman Al-Manea quoted the Prophet (may Allah grant him commendation and protection) as saying, "If you hear of an epidemic in a place, do not enter it; and if an epidemic spreads in a place where you are, do not leave it."

Based on this hadeeth that bans travelling from one location to another during times when highly contagious diseases are spreading, a decision was taken by the government of the Kingdom of Saudi Arabia to limit the number of people performing Hajj this year and to only have individuals from a wide array of nationalities that are already within the nation`s borders.

This allows for Hajj to still be performed while adopting all necessary measures to protect the people`s health and maintaining social distancing, according to the Saudi Press Agency

Precautions have been put in place to protect lives from harm that the pandemic can cause and also to actualize Islam`s teachings pertaining to safeguarding human life by Allah`s permission.

"Deep gratitude is also extended to all Muslims for their positive response to comply with our nation`s precautionary regulations that were implemented in Makkah and al-Madeenah to protect people from the potential effects of the current pandemic," Sheikh Abdullah bin Suleiman Al-Manea stated.

"The Decree of the Minister of Religion shows that the government, in this case, the Ministry of Religion, is highly concerned about the health and safety of pilgrims," Pettalongi remarked.

Minister of Religious Affairs Fachrul Razi had canceled the departure of pilgrims headed for Hajj 2020/1441 Hijri in accordance with Decree Number 494 of 2020.

According to Prof. Pettalongi, the departure of the pilgrimage, cancelled over safety and health concerns, does not contradict the conditions and pillars of the pilgrimage that specifically state that people required to perform pilgrimage should possess physical and mental abilities.

The ability here in the category is about being able to guarantee safety of the body and soul from various threats to the soul.

Pettalongi believes Muslims, especially prospective pilgrims, stand to gain wisdom that the delay in implementation of the pilgrimage can be interpreted as Allah not having granted an opportunity. This is because the pilgrimage is Allah`s call.

Furthermore, with the cancellation in place, prospective pilgrims have more time to prepare themselves physically and mentally.

"Performing worship in Islam requires patience, including the pilgrimage. That way, prospective pilgrims need to be patient as their obedience to God is being tested in certain conditions," Pettalongi stated.

According to Pettalongi, prospective pilgrims should take into account the fact that in Islam, there lies wisdom behind every event.

Meanwhile, General Secretary of the Muhammadiyah Central Executive Abdul Mu`ti noted that in accordance with Islamic provisions, security is one of the key requirements for the implementation of the pilgrimage.

Mu`ti remarked that postponement of the pilgrimage, either by Shari`a or by statutory provisions, did not amount to any violation.

Prospective pilgrims are required not only to be economically capable but also to be healthy, mentally fit, pious, and safe during the trip.