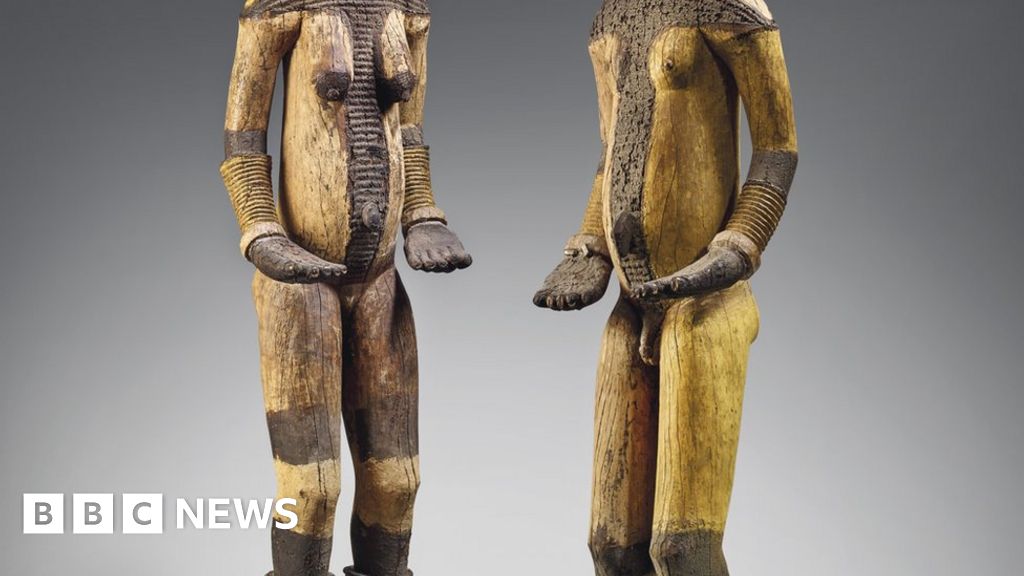 A prominent art historian has called on the renowned auction house, Christie`s, to cancel the sale of two Nigerian sculptures to be put up for auction shortly.

Prof Chika Okeke-Agulu told the BBC the two objects were "looted" from shrines in south-eastern Nigeria during the civil war in the late 1960s.

Christie`s rejects this, saying the sale is perfectly legal.

The wooden objects about 1.5 metres high, one male and one female, represent deities from the Igbo community, their hands face upwards waiting to receive sacrifices and gifts.

Prof Chika Okeke-Agulu from Princeton University says the objects were looted from communal shrines in his native Anambra state, with the help of local conspirators.

He said they could not have been acquired legally because they were removed during the Biafra civil war, when the Igbo community attempted to secede from Nigeria.

The historian believes the loss of these sculptures has meant that a key part of Igbo cultural identity has been lost for future generations.

Christie`s has defended the auction expected to take place at 13:00 GMT.

In a statement, it said that at no stage "has there been any suggestion that these statues were subject to improper export".

According to the auction house, the sculptures were acquired by Jacques Kerchache, a French art collector and a close adviser to former French President Jacques Chirac.

"There is no evidence these statues were removed from their original location by someone who was not local to the area," Christie`s said.

It also said that there was no evidence the items were taken from an area that was part of the conflict at the time.

Calls for the repatriation of African artefacts have grown in recent years, with the #BlackLivesMatter protests reigniting those demands.

An online petition with over 2,000 signatories calls for the sale to be cancelled.